A 6,000-nautical mile circumnavigation of the eastern part of North America, the Great Loop takes cruisers through more than 15 states and provinces in two countries, transiting a wide variety of waterways ranging from narrow canals to mighty rivers, wide windswept bays, and four of the Great Lakes. Most people who take their boat on the “Great Loop” spend years, even decades, planning for it.

Not Dustin Kidd from Louisville, Kentucky. It took him just two months from the day he decided to do the Great Loop in his 1989 50’ Chris-Craft Constellation, Knot Kidd’n, to casting off from the dock. And that included talking a friend, Eva Steuerle, into doing the Loop with him.

“I said, “What are you doing for the next year?” Dustin recalled. 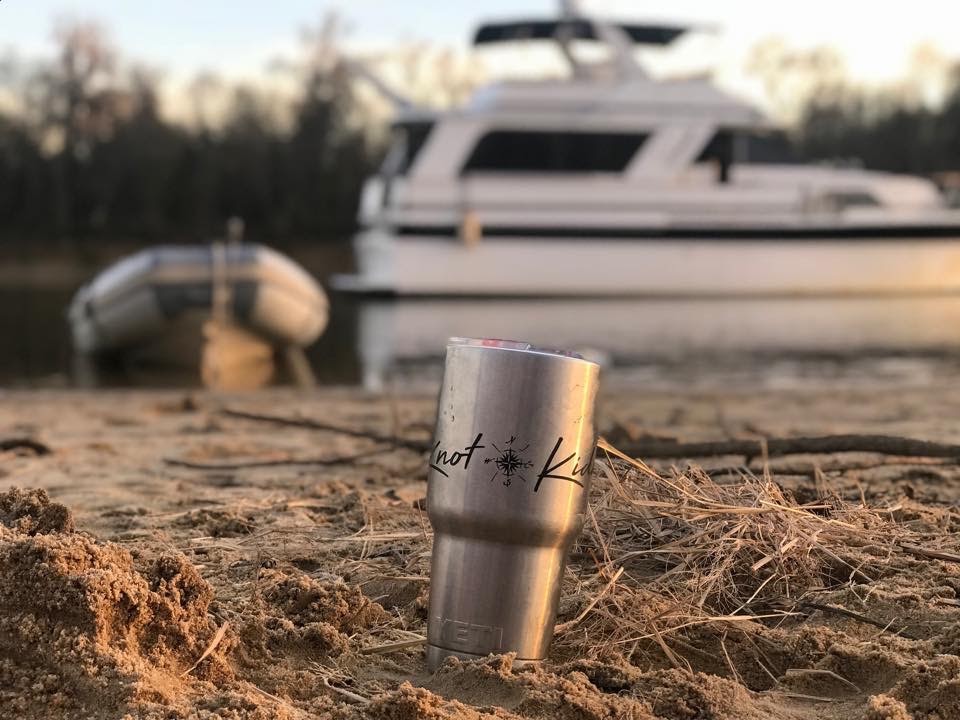 He had plenty of boating experience to draw from, however. “I grew up boating from a very young age. My grandparents lived on a lake in Nashville, Tennessee, and had a boat. My family had a boat and we would hit all the lakes in Kentucky,” he said, adding, “We had a houseboat on Lake Cumberland.”

After graduating from the University of Kentucky, Dustin embarked on a demanding 14-year career in the medical devices industry. During that time, he owned a series of boats and often lived aboard one. In 2017, while taking what was originally planned to be a six-month hiatus from his job, he decided he needed a more spacious home than the Hatteras 43 he was living in. Dustin found the pre-owned Chris-Craft “Connie” on the market in Florida, bought it, and cruised it home to Kentucky along the IntraCoastal Waterway, Tennessee-Tombigbee Waterway and Ohio River.

Since the route he was transiting is part of the Great Loop, he passed quite a few boats flying the burgee of the America’s Great Loop Cruising Association (AGLCA) from their bow along the way, and became intrigued with the idea of doing the Loop himself. He joined the association’s Facebook page and began researching the voyage. From there, everything fell into place quickly.

On November 17, 2017, Dustin, Eva, and his dog, Steele, left Louisville on Knot Kidd’n, heading back down the Ohio the way he had come two months earlier. While he took some flack from other Loopers, most of whom had waited until they retired to make the voyage, for his short prep time and relative youth, Dustin’s philosophy for the trip was to stay flexible. If something went wrong, he said, “I always had Plan A, B, and C. A was to fix it myself; B was to hire someone to fix it, and C was to sell the boat where it is and go home.”

The Loop route took Knot Kidd’n down the Tenn-Tom to the IntraCoastal Waterway, around Key West and up the Atlantic Seaboard. Most of the voyage went smoothly, but Dustin’s resolve was tested when Knot Kidd’n pulled into Belhaven, North Carolina, for the night. After anchoring, the couple performed a task they had done hundreds of times before during the voyage – Eva lowered the Chris-Craft’s tender, a 10-foot, fiberglass-hull RIB, from the davit while Dustin waited for it on the deck below.

“She kept yelling at me to get out of the way,” he said, adding that was not part of their usual routine. “As soon as I took one step to my left, the cable snapped, the dinghy’s motor hit [the mother boat’s] transom hard, and the tender fell into the water and started to float away.”

Dustin dove in and swam after it. “Eva was freaking out on the flybridge, and there was a storm coming,” he said. He was able to climb into the RIB, but he discovered that the motor had locked up due to the hard impact, so he had to row to shore. Following Plan A, Dustin went up to the nearest house to ask the owner for a 9/16-inch wrench he could use to fix the outboard himself.

As fate would have it, he said, “It turns out she had owned a boatyard and had all the tools in her garage. She told me, ‘Take anything you need as long as you bring it back.’”

The highlight of the Great Loop for Dustin and Eva happened when they reached New York City in July 2018. They had berthed Knot Kidd’n at Liberty Landing Marina on the New Jersey side of the Hudson River, then got up before dawn to take a ferry across to Manhattan. By 6 am, they made it to Rockefeller Plaza and staked out a place outside the studio where the Today Show is recorded, hoping to get on camera and wave to their family and friends back home. When a producer handed them a map of the U.S. so they could mark where they had come from, Dustin drew the Great Loop route and wrote “4,000 miles by boat”. The couple also brought their AGLCA banner.

“When Al Roker came out on the Plaza and said, ‘On a day like today, it would be great to be out on a boat, cruising,’” I knew we were about to be interviewed,” Dustin said. Roker spent over 30 seconds live on the Today Show asking the couple all about their Great Loop experience.

In addition to their “30 seconds of fame”, the Loop also brought Dustin and Eva closer to nature, as they got to see and interact with spectacular scenery nearly every day. One of the most memorable evenings of their voyage took place in the fall of 2018 in Ontario’s Benjamin Islands, at the eastern end of Lake Huron’s North Channel.

“There is this island in the Benjamins they call the ‘Ski Slope’ because it is a granite hill. We had met up with this couple from England who were also doing the Loop. We both anchored and tendered over to the rock island and built a fire,” Dustin said.

That night, Eva looked up from the bonfire and saw what she thought was thick haze hanging in the sky overhead. “It was the Milky Way,” Dustin said. “It was beautiful. We were in awe.”

Knot Kidd’n arrived back in Louisville on October 13, 2018, after a voyage of 333 days and 6,124 nautical miles. In all that time, Dustin had only spent one night off the boat.

After getting re-acclimated to life on land, Dustin had time to think back on their adventure and what he would do differently if he were to do the Great Loop again. He realized that the main thing he would change was his tender. In retrospect, it had been a mistake to stick with the RIB that had come with the Chris-Craft when he bought it. “It was a 2013, 10-foot fiberglass-hull model with a 15-horsepower Mercury motor and had some age to it,” he said. “I had trouble with it from the day I started.” 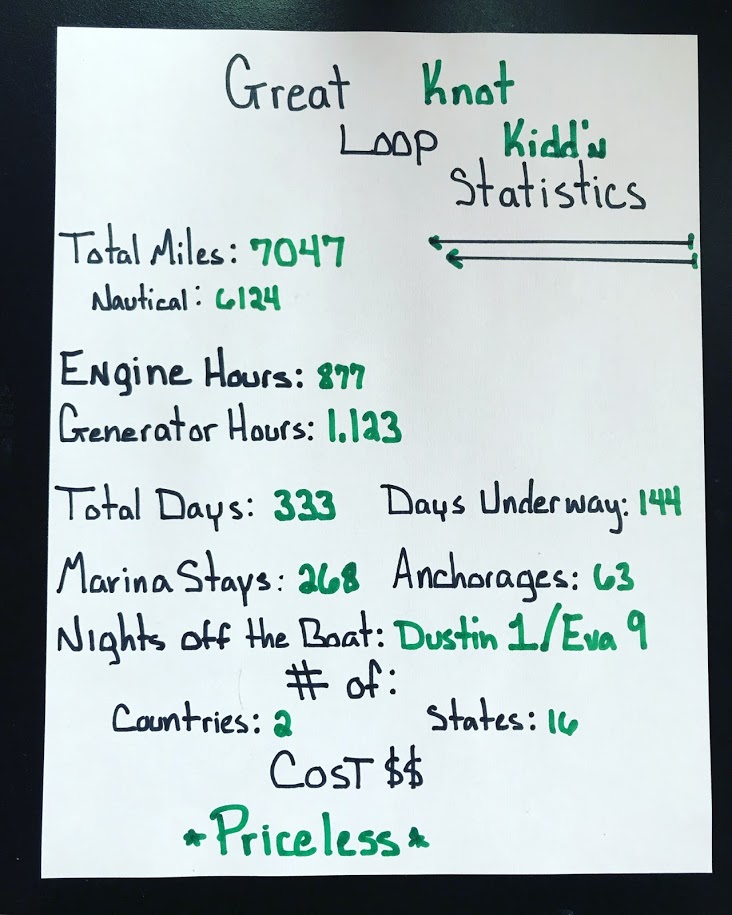 Investing in a RIB that better fit his needs probably would have the Loop more fun, more comfortable – and saved him a lot of money. Knot Kidd’n logged 268 marina nights versus dropping the hook in 68 anchorages during the voyage. If they had had a tender that was configured differently, they would have anchored out more often and saved on marina fees.

When they were at anchor, Dustin had to use the tender to take his dog, Steele, to shore for walks. Unfortunately, Steele was always uncomfortable riding in the RIB. “With the deep-V floor, it was hard for him to keep his balance,” Dustin said, adding that he wished its hull had had more deadrise as well. “When there was the slightest ripple, water kept coming over the bow. We had to Ziploc our shoes,” he said. “I could have paid for a new tender with the cellphones I lost.”

Dustin said he and Eva also would have taken the time to visit more places in the small boat that the 50-foot Chris-Craft couldn’t navigate. “If [the RIB] had had a center console with a wheel instead of a tiller, I would have explored more,” he said.

After the Loop, he finally decided to upgrade to a new RIB. He mentioned this to a friend, who went to a boat show not long afterward. After visiting the Highfield Boats display, the friend called Dustin. “He said, ‘You have to check out this Highfield Classic 380 with an FCT Steering Console,’” he recalled. In addition to the console, which has a steering wheel, the 12’6” RIB also features Highfield’s signature double aluminum floor, which is flat rather than concave.

“I called the dealer and bought it sight unseen,” Dustin said.

The Highfield Classic 380 was an instant success, and Dustin soon started using it for trailer-boating adventures all over the Louisville area. “Once boating season hit, everyone started saying, ‘Where did you get it? I want one,’” he recalled.

Inspired by this experience, in June 2020, Dustin and his business partner, Bob Missi, opened Bourbon City Yacht Tenders, a Highfield Boats dealership in Louisville. Its mission: Helping Great Loopers to find the right tender before they head out.

“I ask them, ‘What are your goals? What do you want in a tender?’” Dustin says. “On the Loop, your tender is your lifeline. You can’t take it for granted.” 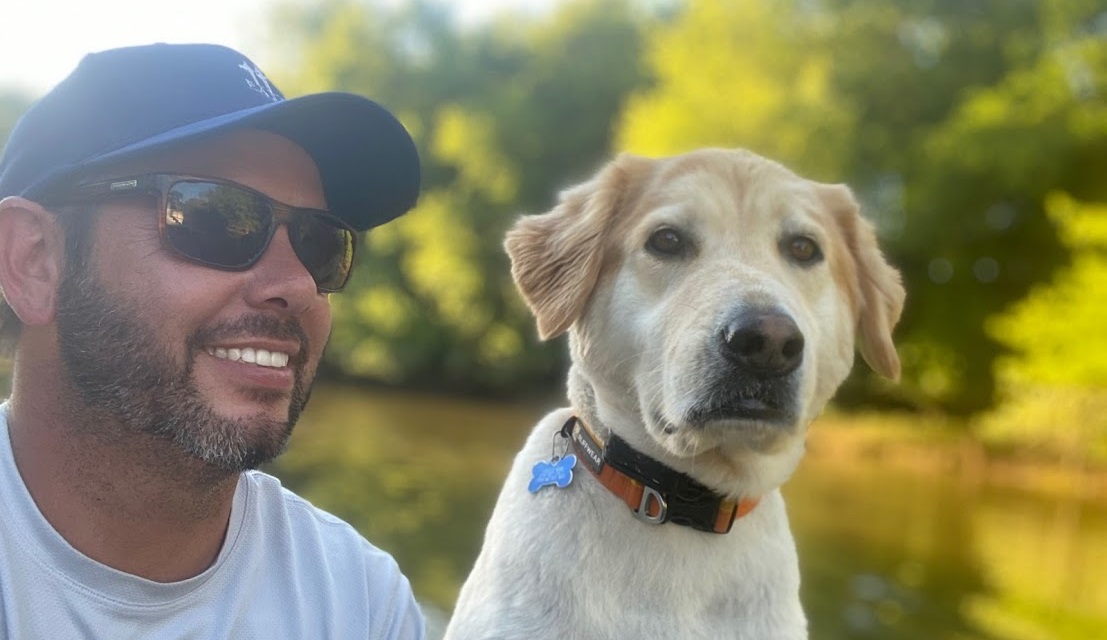